From documents displayed in the Franco-American Exhibit at the Mogan Cultural Center, French Street in Lowell, from mid-June to October of 2005 we learn that the Snowshoe club Le Chanteclerc was founded on 4 November 1939 in Lowell, MA.

There were, at the time, numerous clubs and organizations established to unify the Franco-American community and to contribute to its intellectual and physical development. Some clubs were devoted to modern science, literature and philosophy while others were more inclined to sports and legitimate games with the belief that their members would be in better physical condition to better serve God and country. All in all a main goal of all these clubs and organizations was for the advancement of the general well being of Franco-Americans. 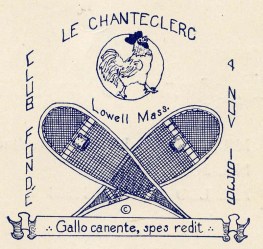 With this idea in mind, 18 people met on November 4th 1939 to create the snowshoes club “Le Chanteclerc”. The meeting was held at the home of Joseph and Gertrude Parent, 86 Fulton Street in the Centralville section of Lowell, MA. It was decided that at the next meeting officers would be elected. On December 10th 1939 Gerard Cayer and Gertrude Parent were elected co-presidents; Joseph Parent and Lucienne Cayer were elected co-vice-presidents; Gerard Bordeleau was elected secretary/treasurer and Minette Lagasse, secretary. It was also decided on this day that the group would meet monthly at the residence of one of the members.

In February of 1940 the club held its first public meeting at the Cercle St-Louis at the corner of Ennell and West Sixth streets in the Centralville section of Lowell. The club grew by leaps and bounds and soon had to find bigger quarters for its meetings. They found these at 292 West Sixth Street and met there for the first time in June of 1940. The chaplain for the club “Le Chanteclerc” was at the time Father Emile Hemond of Saint-Louis-de-France Parish in Lowell.

Currently, in 2018, The Snowshoe Club “Le Chanteclerc” is located on G Street in Dracut, MA.

In 1986 the Snowshoers, Les raquetteurs as they are known in French, had their National Convention in Lowell.  Clubs from Massachusetts, Connecticut, Maine, New Hampshire and Canada met for the weekend of January 24th to parade, socialize, pray and, of course, to compete in various races.  In addition to Le Chanteclerc, two Lowell-based snowshoe clubs, La Feuille d’Erable and Le Courreur des Bois also participated.  This was the second Snowshoers National Convention held in Lowell.  The first was in 1940.